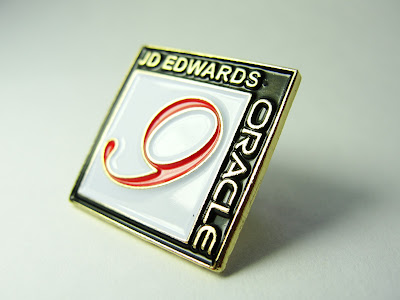 I got this pin at Collaborate 12. Oracle was handing out bags stuffed with JD Edwards' material and gifts at the General Session entrance. I couldn't get one because it was only for Oracle customers, but I got this PIN! YEAH! Another fun thing: inside the bag, had a passport and the idea was to fill the passport pages with some tips that appear during Oracle's sessions and after complete filling the passport, there has a contest or something like that... It was an interesting and fun way to market JD Edwards!

Below the crowd before the main session starts. 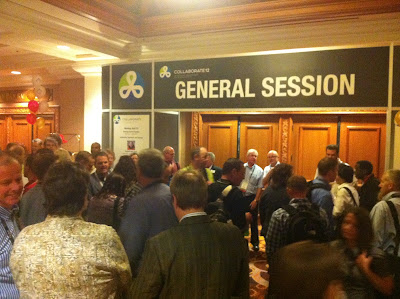 The auditorium being filled for Lyle Ekdahl's talk.

Here's all about: Vision, Promises and Execution: It's the Way We Roll and Why It Matters!! 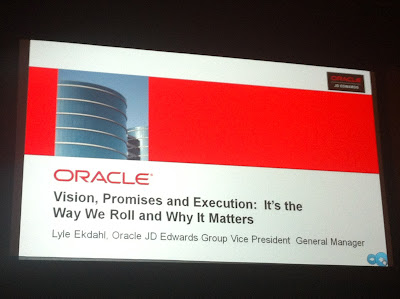 It was such a nice and fun talk! Lyle with his particular way to present JD Edwards. He's very objective, smart and the sense of humor is a characteristic. It's his style. I have to confess it was shocking for me on my first time I saw Lyle starting a talk wearing pajamas with a bear plush on hands waking up from a "Dream"! That was really creative and inspiring for me!! That reflects JD Edwards' position on the market: breaking paradigms, innovating and creating this personality. Reinventing himself! 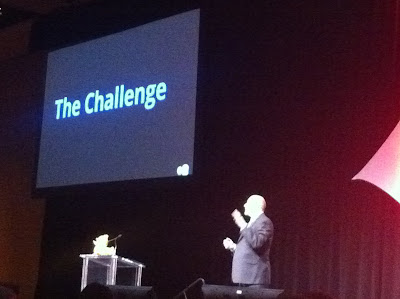 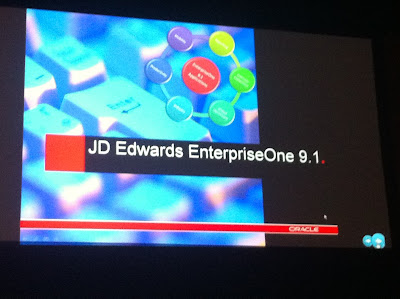 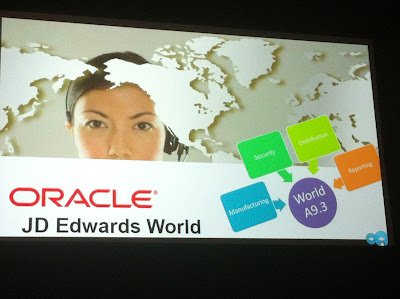 Mobile apps show - it was a live demo; the wi-fi signal was not 100% set, but after a while everything goes well and we could see the Mobile applications running. In this case, the Mobile Expense Management module running! 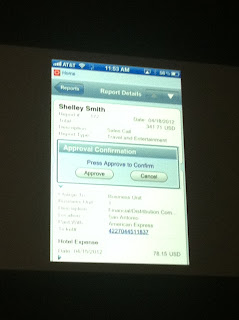 In this final picture, Lyle's on a such performance got a FLAG, a GUN and a DUCK... He shot a duck on the stage!! But hold on, the duck was a toy and no firearms there! That was to justify his year's resolution he mentioned here: http://goo.gl/gmfeJ 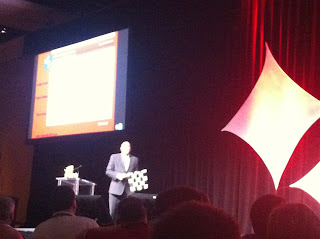 I'm still working on JDEFusion Collaborate12 Report, but after going to Vegas I had a trip to Washington DC and next week I'm flying to Brazil to stay with my family and friends after almost a year in US. It's being such a busy time for me, but I'll do my best on the report! Thanks again for the reading and hope to see you soon!

Popular posts from this blog

By Gustavo Barizon May 15, 2012
Hello and welcome to JDEFUSION.com! Here's a video tutorial on how to install the newest JD Edwards 9.1 version! In only six steps and no magic, you will have your JD Edwards up and running, including the Web version! The JD Edwards team did an outstanding job on this new version and I'm proud to be the first to document in video the installation steps and show you the system working after the installation. The tutorial is divided in the following steps: Images download - E-Delivery Directory preparation Oracle 11g 32 bit installation JDE Demo installation Post installation procedures System check By following the video you'll be able to have your own JD Edwards' instance running directly in your PC or you may also install as a Virtual Machine using Oracle Virtual Box. The base OS I'm using for this tutorial is Linux and as you can see, the Virtual Box VM works fast and is also stable. Please let me know if you need some information on how to se
238 comments
Read more

A new experience on www.innova9.io!

By Gustavo Barizon September 25, 2018
After almost a year, a new and redesigned web site for Innova9. With this new website, we'll be able to communicate better, educate better, and we launch a new initiative for integrations: We'are now Dell Boomi's Partner and we can build seamless integrations for on-prem, Cloud and hybrid business scenarios using JD Edwards' Orchestrator and the versatility of Dell Boomi. Also, we're launching our Products section, starting small with our JD Edwards' Sandbox installation and hosting as well as our Orchestrator Masterclass. There's more to come! Take a look at our Services: all focused on EnterpriseOne innovations, from UX One Enablement, to our new Online Help Desk, where we'll serve your Business Analysts, Power Users, and End Users with instant messages to help with UX and User Defined Objects activities. All in a super affordable price, available per user / per month on subscription base. Want more? Our articles now have a new place! Started with
158 comments
Read more